What Is Scottish Country Dancing, Anyway?

(This is a note I wrote for inclusion in the soc.culture.scottish FAQ maintained by Craig Cockburn. It has been adapted slightly in the meantime.)

Scottish country dancing (or SCD, for short) is a modern form of the “country dancing” popular in England and Scotland in the 18th century. It involves groups of six to ten people (most of the time) of mixed sex (most of the time) – a “set” – dancing to the driving strains of reels, jigs and strathspeys played on the fiddle, accordion, flute, piano, drums, etc. (no bagpipes, mostly!). The dance often combines solo figures for the “first couple” in the set with movements for all the dancers, although there is considerable variation – there are over 14,000 different dances catalogued, of which maybe 1500 or so are of lasting and non-local importance. A number of these dances derive from traditional sources such as old manuscripts and printed dance collections from the 18th and 19th centuries, but most have been invented in the fairly recent past, say the last seventy years or so. This fusion of the traditional and the modern as well as its ongoing evolution are part of the attraction of Scottish country dancing.

Think of SCD as a cross between square or contra dance (although there is no caller) and ballet; there are about a dozen basic figures which will get you through quite a number of dances, although many dances have their own quirks and specialities which make them unique and fun to dance. There is also more emphasis on “steps” than in, say, ceilidh dancing, but the basic technique can be learned at a week-end workshop or through a couple of months' worth of practice evenings once a week. Even though there are so many dances, you don't have to learn any of them by heart if you don't want to – the programmes for balls and social evenings are usually published well before the event, so everybody can check their crib sheets. Also, at the event itself dances are often recapitulated or even sometimes walked through slowly before the music starts (although local custom may vary). 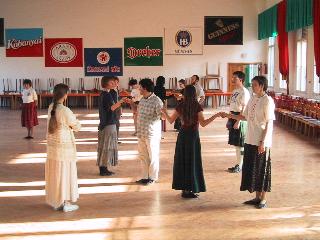 SCD is a very social form of dancing, not only because you get to dance with seven or so people at once instead of just with one partner (smiles and eye contact are almost mandatory, and if you want there is a lot of opportunity for relaxed “flirting”) but also because there are workshops, balls and social dances being held in places all over the world. It is nice to be able to travel and join a SCD group for a night nearly everywhere you go.

When country dancing came to Scotland in the 18th century, it was at first popular among the townspeople in places like Edinburgh, but spread throughout Scotland (at varying pace) and thrived there even when, during the 19th and early 20th century, more modern dances like the waltz, one-step etc. became fashionable in other places. Country dancing in Scotland was also influenced by other Scottish dances such as highland reels and so acquired a particular “Scottish” flavour.

Its patrons went out to watch people dance and collect the dances for publication. In the process, they also tried to reconstruct and publish dances from old manuscripts that were no longer actually danced, and standardised technical points like steps and footwork (which the common folk rarely bothered a lot about). It is debatable whether this standardisation was actually a good thing as far as preserving the tradition of Scottish country dancing was concerned, but it has certainly done a lot for making SCD into something that can be enjoyed internationally. In fact, Scottish country dancing is probably more alive today than it ever was in the past, and this is to a very large extent due to the efforts of the RSCDS.

Today the RSCDS numbers about 13,000 members and has “branches” in various countries all over the world. Lots of SCD groups world-wide are affiliated with the RSCDS even though they aren't actually branches of the Society, and even more people enjoy SCD without being members of the RSCDS (or any group) at all.

The RSCDS is at

Their e-mail address is info@rscds.org, and there's a web site with general information as well.

There is an Internet mailing list (not affiliated with nor officially endorsed by the RSCDS) for discussing Scottish country dancing and music, which goes by the name of “Strathspey”; send e-mail to strathspey+help@strathspey.org. There is also a World-Wide Web server containing an archive of the mailing list as well as lots of other interesting items connected with SCD at http://www.strathspey.org/.