Colin Robertson, formerly of the Scottish National Dance Company, asked me in May 2017 to share the following (see also http://colinrobertson.net/slipstop.html):

As many of you will know Lewis Innes died in 2010 and at that point the Scottish National Dance Company ceased trading. Before his death Lewis asked me to keep the product in existence, a difficult request to fulfill, but I promised I would.

The solution to my problem was simple, or so I thought – I would make a kindly gesture and gift the formula and sales rights to the RSCDS and all would be fulfilled. This I did through the auspices of former President Alex Gray. Unfortunately the RSCDS have not been able to obtain all the constituant parts for the product and so, in order to fulfill my promise to Lewis, I have decided to put SLIPSTOP in the public domain allowing anyone the right to make, for self-use or commercially sell, the original product under the name of SLIPSTOP. 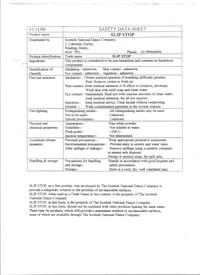 Many have tried to work out the formula, some have got close, but none that I know of have succeeded. The “non-slip” part of the product is Zinc Stearate, a powder used by magicians for card fanning also the foundation of some make-up products such as bareMinerals®. Used alone the Zinc Stearate presents the problem of air borne pollution. In order to control the very light powder a heavier “carrier” has to be added, in this case Sodium Stearate, which allows the Zinc Stearate to attach to it. Both constituent parts are used in the soap industry. The proportions are important: 50% Zinc, 50% Sodium. Anyone wishing to make this product to the above specifications is welcome to call their product SLIPSTOP and use the Logo to identify it as the original. Any variation in the composition or additional component invalidates the use of the Logo.

Suppliers of both Stearates can easily be found in the UK and other countries with the aid of Google Shopping. Small quantities may be purchased from your local dispensing chemist.

Colin also says: “If you do decide to commercially produce, let me know and I will help promote.” To which we here at Strathspey add, by all means do give us a shoutout, too.

Finally, in the meantime the RSCDS seems to have got its act together and is selling SLIPSTOP from its online shop. The above may still be interesting for people overseas who would like to avoid paying extra to import something that is probably fairly straightforwardly available locally. As a data point, we here in Germany buy zinc stearate a kilogram at a time for €30 or so, while SLIPSTOP from the Society's shop costs the approximate equivalent of €20 for 160 grams in a fancy container, plus postage to Germany, plus German VAT-equivalent import tax (thank you Boris!). Presumably if you get it by the lorry load it becomes literally dirt cheap. Dancers in the UK, though, should consider the Society's offer carefully because especially the zinc stearate is something of a hassle to deal with.